THOUGHTS—Urban farming can feed the planet 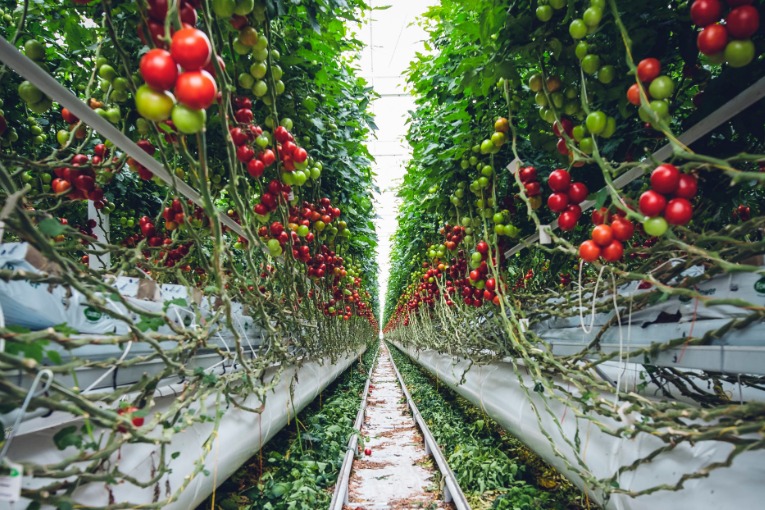 In 1906, Alfred Henry Lewis claimed, “There are only nine meals between mankind and anarchy.” It’s easy to imagine people quickly descending into panic after missing just nine meals, shunning their moral compass and getting food by previously unthought of means. And it doesn’t take a crisis for behaviour to escalate: Remember the empty toilet paper shelves during the Coronavirus breakout earlier this year?

Panic buying and empty supermarket shelves is taking us all by surprise this year. We are front row witnesses, watching our ‘just in time’ food supply chain balance on fragile assumptions of constant supply and predictable demand.

Our survival depends on a constant supply of food. The consumption of most other products can be delayed (that new t-shirt or pair of sunglasses) but you won’t get far without regular eating. Simple.
But from here things start to get complicated. Our planet has a growing number of mouths to feed and at current rates of food production, we won’t keep everyone fed. According to this United Nations article, the amount of food we’re growing today will feed only half of the population by 2050.

What’s more, our global diets are changing. As people in developing countries become more prosperous, this recent research has found they’re consuming more meat and dairy. Yet United Nations expert body, the Intergovernmental Panel on Climate Change (IPCC), argue we need to be moving in the opposite direction, switching to plant-based diets to reduce emissions. If we do this, research indicates we will decrease our need for agricultural production because much of the food we give our animals (such as maize) is actually fit for human consumption.

At a simplistic macro-level, the process of farming is largely plant the crop, spray weeds and pests (most often with a fossil fuel based formulas), harvest the crop, add back (more fossil fuel based) fertilisers to the now depleted soil, then repeat. Deplete. Repeat. Tilling, fertilising and applying chemicals to billions of acres of land is destroying our fragile soil ecology. And while there are multiple examples of progress towards better land management, the pace is out of step with our planet’s needs.

Climate change is a key player in food production. On one side, crop yields are predicted to decrease with climate change. While on the other side, crop production is contributing to climate change. According to this World Economic Forum article “The sector accounts for 30% of greenhouse gas emissions and 70% of freshwater withdrawals, so attention has to be paid to energy and water use in farming. Waste is also a problem, with an estimated one third of food consumption, some $750 billion in value, lost.”.

Is urban farming the answer?

When we think of food production, thoughts typically turn to traditional, broad acre farms. While growing food in cities is at best a secondary thought. Yet food farmed in cities is an old story: In leaner times, our grandparents saw the backyard veggie garden as an important part of the home economy. The allotment too. And today these highly localised veggie plots are undergoing somewhat of a renaissance.

Almost 20% of the world’s food supply is grown in cities as reported in a Future Directions research paper. For now, this system is heavily weighted to developing countries while in the west, most of our food currently comes from traditional rural farms. It makes one wonder though. Are developing nations actually in the process of developing in a way that more ‘evolved’ Western societies are going to struggle to emulate?

On a brighter note, new technology is driving the growth of urban farming in the west’s cities too. Here they’re gaining a foothold in unlikely places – think unused city car parks, old railway tunnels and abandoned mine shafts. Vertical farms are making unthought of spaces productive which is demonstrated in this fascinating BBC article on how abandoned coal mines are finding a new life as underground food farms.

Farmwalls are one of these new technologies. Instead of growing food in the traditional horizontal way, it’s grown in vertical stacked layers. Farmwall’s founder Geert Hendrix explains, “A farmwall is a small scale aquaponic vertical farm. We mostly grow micro greens because they’re so efficient, providing the most amount of nutrients in a relatively short growing time. It works like a natural ecosystem. We have fish in the bottom, the fish create ammonia, that transforms into nitrates through the good bacteria in the system.”

Vertical farms commonly use alternatives to soil such as hydroponics or in the case of Farmwall, aquaponics, in climate controlled rooms. Growing food vertically saves a significant amount of space, removes the need to clear new land and can reinvigorate unused or abandoned places.

What’s more, seasonal variation and adverse climatic events like drought, flood and fire that frequently devastate farms in our global food supply are much less of a threat. The catastrophic bushfires in Australia in early 2020, that wiped out millions of hectares of land is a great example. As we experience more climate variation, these impacts on traditional food production will increase.

Indoor vertical farms eliminate these issues. Their stacked structures and climate-controlled systems can be solar powered with UV light modified for maximum output. And they’re highly productive, yielding up to 10 times more per acre than traditional farms (Statista). Also, because they can be built in urban settings close to where the food is eaten, there are far fewer trucks hurtling up and down motorways, significantly reducing food miles.

Calculating the benefits of vertical farms

But then, they are rather pricey to set up.The high capital costs these farms command quickly adds up: City real estate prices, the energy demands of climate control and lighting systems, irrigation and labour all tally to a low RoI in traditional measures. One study in Australia (Future food production systems by Kurt Benke and Bruce Tomkins) claimed that the cost of a vertical farm would be over 850 times more per cubic meter of arable land than a traditional farm.

The limitations to growing our food in urban spaces are real and the likelihood that we’ll provide for the world’s fast-exploding calorie requirements within the walls of our cities does seem somewhat far-fetched. Balancing the environmental benefits of urban farming after the high energy and capital requirements are factored into the equation doesn’t simplify matters either. Farmwall’s Gert Hendrix agrees, “I wouldn’t say we’re creating a volume of produce that actually makes a difference at this point in time.”

Hendrix’s perspective on what we consider ‘benefit’ is a major step away from current thinking. He argues, “It’s more about awareness: Seeing food grow right in front of you, reconnecting with how it’s grown, appreciating the fact that it’s grown in a natural way. It’s also the education around it. Farmwall is a completely closed loop, zero-waste food system on a small scale, which forces people to think how this could be done on a larger scale. It encourages people to make different decisions and ask different questions: Where is my food coming from ? How is it grown? What is the impact on the environment and the farmer that grows my food? Can I support the farmer better and pay a higher price so they can grow better food? It’s more about education and awareness than the volume of food.”

This is not agribusiness as usual

Vertical farming businesses must contend with breaking through the traditional business thinking too. Hendrix explains this ongoing challenge: “It takes a lot of energy and persistence to get the momentum required to get our business off the ground. We’re doing something completely different, something that’s never been done before. We need to continually prove that what we’re doing actually makes a lot of sense from a future perspective; financially, socially and environmentally. Not everyone always understands this value, so it takes a lot of energy simply communicating.”

These are not traditional systems, the benefits are beyond basic economics. If we simply use old-world financial measures to compare these new ag-tech systems with traditional agriculture, we overlook a whole host of holistic benefits that urban farming puts on our table.

What’s not done is a massive benefit too. Like the environmental impacts of removing the fertilisers that leech into our waterways or the carbon that once healthy soil would not only draw down from the atmosphere but use to feed the plants. This stuff isn’t currently accounted for when comparing new and old agricultural systems.

Yet the world is coming around. And it’s happening everywhere.

Sustainability is the foundation of Farmwall’s products, operations and business model. You can’t buy Farmwalls, instead they’re leased. Hendrix explains, “We see sustainability as a business responsibility as well. We believe we’re fully responsible for what we make and must ensure none of it ends up in waste or in landfill. So a Farmwall is designed to be durable to last and to provide food for a long period of time. If we were a business that just sold units, with a goal to sell 1000 units every year, we’d make them very cheap and light and flat packed and we could send them all over the world. But we believe this would also turn into waste very quickly, which doesn’t deliver on the promise we are making. People are more enticed by the learning and access to fresh food rather than ownership. We deliver outcomes, we don’t sell units.”

Finding farms in your neighbourhood

Hendrix and his team provide and service Farmwalls to schools, workplaces and airports. The benefits these new greenscapes have created are significant. “Our children are growing up with greens, literally, like diamonds beneath their feet. School children, teachers, staff, employees and teams are engaging in food growing processes that they would never have dreamed of doing in the office or at school.”

It feels pretty good too. So often, when walking through town, it feels like nature is struggling to bust through the concrete. The trees, green parks and open areas make us feel happy. It feels pretty good to wander across a little bit of farming utopia squeezed in between our city boundaries. Like hopping off the bus in central Sydney and nipping down to the underground carpark where Farmwall service over 3000sq ft of microgreens. Hendrix explains, “We recently opened a farm in Westpac Bank’s Head Office, Westpac is one of Australia’s biggest banks. It’s a combination of indoor farm, coworking space, yoga, art classes and urban farming sessions. Working with these kinds of groups makes me feel like we can already make the difference we want to create because of the scale and possibility within their networks. If we get groups like this excited I think we have a chance of actually changing paradigms within a very large groups, leading to the changes we want to see and more food production in our cities.”

Urban agriculture has the potential to give ‘work’ a whole lot more meaning. The benefits for employees are starting to add up, as Hendrix explains, “Farmwalls are proven to improve employee satisfaction and lift Net Promoter Scores. Stress levels are lowered when people experience fresh food grown in their work environment. They see their employer providing access to nutrient rich foods in their day to day lives.”

If you look around, the opportunities to get involved in growing your own food, starting your own miniature farm are right there in front of you. Or behind you in the backyard. If you need more inspiration, head to the arches under Liverpool’s sprawling railways tracks. They’re no longer a dumping ground for syringes and empty cans of Special Brew. There are kids there eating their greens. Because they grew them.