THOUGHTS—Goodwill Wine: Who is David Laity? 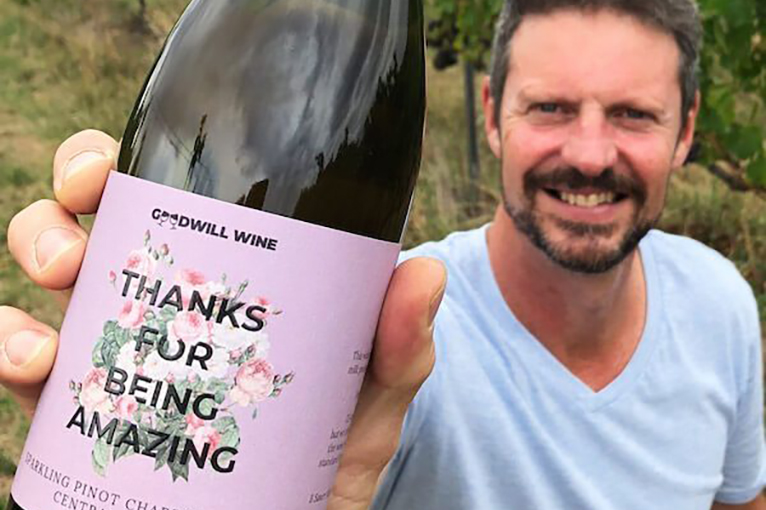 You won’t meet many wine connoisseurs as modest as David Laity. He is the founder of Goodwill Wine, a fabulous business offering carefully selected wines from some of Australia’s finest vineyards, at a fraction of their original price. What’s more, he donates 50% of profits to the cause of your choice (over 300 charities to choose from). We know, sounds almost too drunk to be true.

He juggles his 50-hour work week with being a part-time volunteer fire-fighter and a single dad. For a man who has volunteered his whole adult life, when prompted whether he considers himself an Aussie battler, he swiftly rejects this; instead suggesting that he’s just someone with ‘a dream. A mission. And faith we can get there.’

A quick look into his journey with Goodwill Wines sees his dream is well on its way. After losing everything to the 2009 Black Friday Bushfires, his community displayed a ‘groundswell of support’ and raised $15,000 to help him get back on his feet. Since then, he’s returned the initial investment back to Australians 20 times over; surpassing over $300,000 in donations to over 300 charities.

The whole process wasn’t without its difficulties. What is now a fond memory, in the first five years he was sleeping in a warehouse surrounded by his wine. On second thought, that doesn’t sound too bad…

Coping with the Bushfires

With many Australians currently suffering the same ill fate David that had faced all those summers ago, his advice for those affected was to ‘ask for help, like (he) finally did.’

Organisations like Australian Red Cross and Salvation Army have been in the forefront leading our country’s largest bushfire relief funds. Both organisations have ensured a high level of transparency regarding where the donations are going, yet they have still received significant criticism from the Australian public. David deems this response disappointing, suggesting that it’s ‘unrealistic to use all funds immediately. These communities will need help in years coming, and there’s going to be a lot of people still in trouble in 10 years who must lean on organisations’.

During a time of large scale crisis, Australians have mobilised and come together in solidarity. Corporations, businesses and individuals are eager to help and charities have been flooded with resources. Goodwill Wines jumped onboard and ran Double Donations for the Volunteer Fire Brigades and raised $1748 in just 48 hours, in effect, donating 100% of their profits.

Beyond Business as Usual

When asked about the staggering $300,000 milestone in donations his business just reached, David was joyed but quickly added ‘I don’t think we’re doing enough. No matter how much we do, we should still ask ourselves’ what more can we do’.

Like most entrepreneurs, his days are full of meetings and phone calls, in pursuit of new opportunities. What makes David stand out from other C-suiters, is his desire for opportunities in pursuit of purpose over profits: ‘We’re nothing if we can’t help people who can’t help themselves.’ He continues, ‘Most problems in this world are caused by the relentless pursuit of profits’. He offers an optimistic outlook to this, expressing that people increasingly want to support social enterprises; a significant factor in Goodwill Wine’s success.

We finally asked David about what the future of Goodwill Wine looks like:

‘Huge things are going to happen. We’re going to be rolled out in IGA stores around the country, which means greater economies of scale and way more money for charity.’

It’s hard not to get excited hearing him out…

‘We want to be competitive with Australia’s largest online wine stores, with well over 1 million dollars donated’.

What began as a conversation about responding to the tragic bushfires, ended up as a heartfelt discussion about the responsibility individuals and businesses have towards each other, as David says ‘we just need to be a part of the solution, not the problem’.

Wine for Pleasure and Purpose

David Laity is the kind of person who could craft an exceptional business model that would appeal to most Australians. He just gets what we want. Goodwill Wine is that: a hedonistic escape in the shape of a glass, whilst making sure what escaped from the bottle is reabsorbed back into the community.

With loyal fans coming up with endearing labels such as ‘If only you were Prime Minister’ and ‘Feel the power of Positive Drinking’, there’s nothing better than a mantra on a bottle. To ensure a more guilt-free hangover, grab a bottle or case. Just do it.

What’s the big deal with being a B Corp?

What makes for good leadership?
What kind of leadership is needed right now?
Hear from, and connect with, leaders from Australia,
New Zealand, Canada and the US.